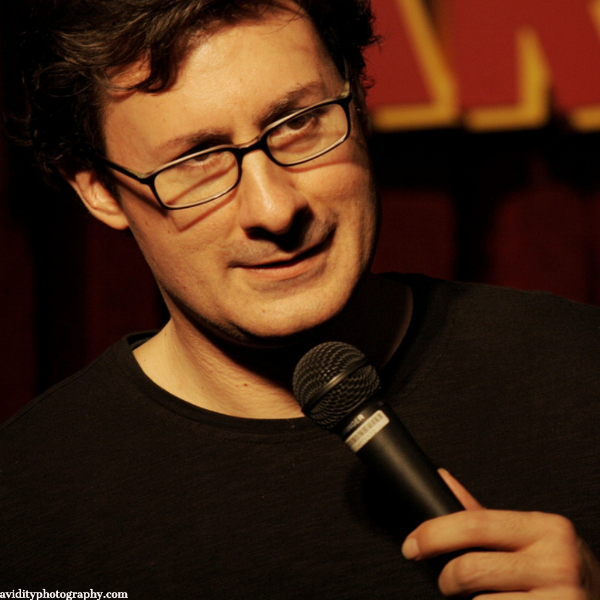 Acme Comedy Company is an 18+ venue for all shows.

Seats in the club are assigned when the tickets are claimed at the Box Office. As a bonus for our Dinner & Show guests; their seats are assigned first. Seating after that is on a first claimed, first assigned basis from the front of the club to the back. You can pick up your tickets as early as 2 hours before the show starts (seats are assigned then).

Please note: Gratuity is NOT included in your purchase. The FEE associated with purchase is for the ticketing company, Seat Engine, as a handling fee for their service. Seat Engine is a separate company from Acme Comedy Company.

More information about our Dinner and Show packages is available here: https://bit.ly/3QhQm9I

*If you are trying to purchase tickets, and none are available ONLINE, please call Acme at 612.338.6393 to see if there are any more available.

In the spring of 1993 Costaki was doing graduate work at the University of Georgia. He spent most of his time hammering out a thesis on the influence of political satire on our feelings about government. His off time was spent honing his stand-up skills in pizza joints and bars around town. When he had to turn down a couple of gigs to work on the paper, it made his stomach hurt. He hung in there, finished the thesis, got his master’s degree, and within a year was a full-time comic on the road. He has been criss-crossing the country telling jokes ever since.

His humor has been described as smart, pointed, hip, sharp, insightful, socially relevant, and gut-laugh funny. A fellow comic once referred to Costaki as a “casually brilliant joke philosopher.” He weighs in on everything from parenting and politics, to pirates and rice cakes. And his light swagger, playful squint, and wry smile tell you that perhaps there’s more to this multi-layered joke than you first recognized.

Costaki began to make some noise in the business by reaching the finals of the Seattle Comedy Competition, where he was discovered and invited to the prestigious Montreal Comedy Festival. He was just one of ten finalists in Comedy Central's Laugh Riot national talent search. He’s been back to Montreal twice since then

Also a talented writer, Costaki’s jokes have appeared on The Tonight Show, The Late Late Show, and Best Damn Sports Show Period. He was a writer for BET, where he was staffed on two of their hit shows. He wrote jokes for Bette Midler's Kiss My Brass Tour. Costaki spent Spring Break one year in Cancun writing on the MTV show Parental Approval. He also wrote daily for The Complete Sheet, a DJ prep service that goes out to almost 500 stations worldwide.

But he is easily best known for The Economonologue, a weekly segment on the syndicated Bob & Tom Radio Show that reaches some five million people in 150 markets. And that segment has spun off into Quick Snaps, the all-NFL topical version, which also has a weekly home during the season on Sirius XM Satellite Radio. This national exposure has opened the door to Costaki’s dream: people coming to see his live performances “on purpose.”

After a performance with Jake Johannsen, Costaki’s mother said, “You were better than that other guy.” And really, is there anything more to say after that?